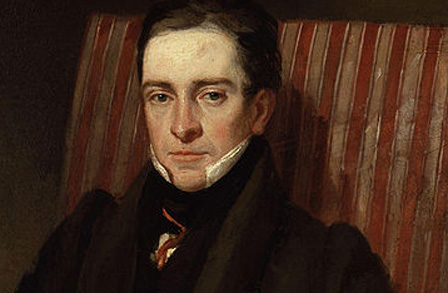 Thomas Hood was an English poet, born above a bookshop in Poultry, London. His first literary works were published when he was aged just fifteen. He worked in a countinghouse (accountants office) and briefly as an engraver before developing his skills for writing humorous and poetic articles for magazines, which were admired by literary celebrities of the time such as Charles Dickens. Whilst many of his poems were comical, he also wrote several more serious poems about death.

The poem titled ‘The Death Bed’  refers to the death of Thomas’s sister Anne. I consider that particularly the third verse, refers to his fear of death, but also gives some comfort to the reader, by implying that then moment of death is not terrifying, but in fact peaceful. Thomas also experienced the death of his father and brother, making him the most adult male in the family for a time, before his mother died.

Thomas married Jane Reynolds in 1824 and they had three children, with the first only living a short time. Whilst the majority of his work is humorous and jovial, the poems about death, may have been due to his concern for his own health which was not good.

This poem, for me, is Hood questioning his mortality and his faith. There is no humour in this one, but it does show his talent for more beautiful poetry.

Death
It is not death, that sometime in a sigh
This eloquent breath shall take its speechless flight;
That sometimes these bright stars, that now reply
In sunlight to the sun, shall set in night;
That this warm conscious flesh shall perish quite,
And all life’s ruddy springs forget to flow;
That thoughts shall cease, and the immortal sprite
Be lapp’d in alien clay and laid below;
It is not death to know this – but to know
That pious thoughts, which visit at new graves
In tender pilgrimage, will cease to go
So duly and so oft – and when grass waves
Over the pass’d away, there may be then
No resurrection in the minds of men.

The third poem that I have chosen from his works is ‘The Sea of Death’ in which again he seems to be considering what death will be like, and is aware that it is approaching. Again, there is no humour and it is beautiful to read.

The Sea of Death
A FRAGMENT
—Methought I saw
Life swiftly treading over endless space;
And, at her foot-print, but a bygone pace,
The ocean-past, which, with increasing wave,
Swallow’d her steps like a pursuing grave.
Sad were my thoughts that anchor’d silently
On the dead waters of that passionless sea,
Unstirr’d by any touch of living breath:
Silence hung over it, and drowsy Death,
Like a gorged sea-bird, slept with folded wings
On crowded carcases—sad passive things
That wore the thin grey surface, like a veil
Over the calmness of their features pale.
And there were spring-faced cherubs that did sleep
Like water-lilies on that motionless deep,
How beautiful! with bright unruffled hair
On sleek unfretted brows, and eyes that were
Buried in marble tombs, a pale eclipse!
And smile-bedimpled cheeks, and pleasant lips,
Meekly apart, as if the soul intense
Spake out in dreams of its own innocence:
And so they lay in loveliness, and kept
The birth-night of their peace, that Life e’en wept
With very envy of their happy fronts;
For there were neighbour brows scarr’d by the brunts
Of strife and sorrowing—where Care had set
His crooked autograph, and marr’d the jet
Of glossy locks with hollow eyes forlorn,
And lips that curl’d in bitterness and scorn—
Wretched,—as they had breathed of this world’s pain,
And so bequeath’d it to the world again
Through the beholder’s heart in heavy sighs.
So lay they garmented in torpid light,
Under the pall of a transparent night,
Like solemn apparitions lull’d sublime
To everlasting rest,—and with them Time
Slept, as he sleeps upon the silent face
Of a dark dial in a sunless place

Having read about his whimsical character and tendency to be a bit of a joker, there was clearly a sensitive more private side to him. He moved to Koblenz in Germany (spelled Coblenz before 1926), moving back to London as his health deteriorated. He died aged forty five.

His funeral took place Kensal Green Cemetery in London in the borough of Kensington and Chelsea and a monument honouring Thomas’s life was erected some years later. His wife Jane died eighteen months later.

Thomas Hood has a memorial plaque on a house where he lived and died 28, Finchley Rd, St John’s Wood, London, NW8 6ES