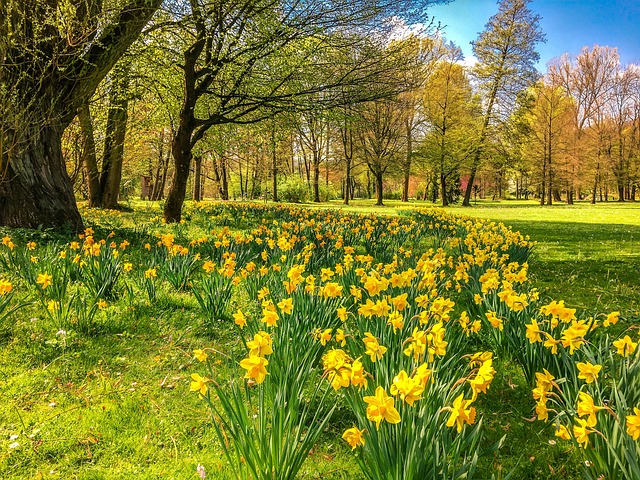 If you are a regular reader of my blog, you will know that it mainly focuses on death and technology, however there are times when I wander from these topics sometimes, and whilst this post ‘Notice the Daffodils’ can be linked to these subjects the link is very subtle. Please read on.

My father has recently been discharged from hospital, and due to mobility issues he has been able to get upstairs in the cottage he has lived in for 58 years. Despite investing in a stair lift, it was decided this week that a temporary hospital bed should be delivered to his home so that he could sleep downstairs. I had arranged to meet my sister at the cottage to help organise the furniture to make space for the new bed. My sister mentioned to me that she had a bunch of daffodils in the car to give me before I left to go home.

I had booked a ticket to go to an event during the afternoon called ‘Firesmoke – The need to make technology more humane’ (here is the subtle technology link), so I left my sister at the cottage to await the delivery of the bed.

The presentation was delivered by Dave McRobbie and has been given the name Firesmoke as he believes that technology can be compared to a fire that is making more and more smoke. The smoke then stops us from seeing one another, as technology develops humans have less human connections, creating isolation. It was very thought provoking and I was very pleased that I had the opportunity to hear what he had to say. He is giving future presentations, the details can be found on his website here:

‘I will enjoy your daffodils xx’

as I had forgotten to get them from her car.

I own a book called Poem for the Day which has a poem for each day of the year, so it was a coincidence that the poem for yesterday, the 12th March was titled ‘To Daffodils’, written by Robert Herrick.

Here is the poem:

Fair Daffodils, we weep to see

You haste away so soon;

As yet the early-rising sun

Has not attain’d his noon.

Until the hasting day

And, having pray’d together, we

Will go with you along.

We have short time to stay, as you,

We have as short a spring;

As quick a growth to meet decay,

As you, or anything.

As your hours do, and dry

Or as the pearls of morning’s dew,

Ne’er to be found again.

The text written below the poem in my book explains that Robert Herrick was a vicar in Devon who was supposed to have cursed his inattentive congregation before learning to accept them as they were and appreciate the local land and their traditional customs.

Robert Herrick’s poem is telling the reader to make the most of their lives, as it passes by quickly, and he compares human life to a daffodil which flowers briefly in springtime. The words are a reminder that the world around us is beautiful as is love, and we should appreciate that. I think this was also part of Dave McRobbie’s message, that whilst technology has been created to help us, we must not be aware that large technology companies like Google and Facebook are feeding us information that is causing addiction which is not beneficial to our mental health.

So notice the daffodils today, they will soon be gone.

See my other Blogs