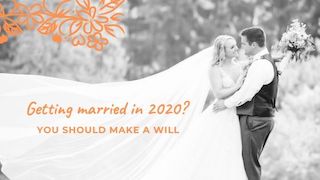 You may have organised the wedding venue, the outfits, the flowers, but probably not arranged to have a will written or re-written. This is probably not something that is a priority, but it is a very important step that you should take.

If you have an existing will, the moment you are married to your new love, it would immediately become invalid, so it is imperative that you make a new one after your marriage. You can make a will before you marry your partner, as long as you state that you have made it ‘in contemplation of marriage’, and name the person you intend to marry.

If you are getting married and have children from a previous marriage or relationship, any existing will that named them as inheritors, will immediately be revoked when you marry your new partner. According to the an article in the Financial Times in January 2020:

More than half of British adults have not made a will. Of those who have, many have not updated their wills for some time, which is reflected in the soaring number of inheritance disbutes heard in the High Court. Lucy Warwick-Ching

To ensure your future partner and any other dependants do not have to face the a legal battle over inheritance issues in the event of your sudden death, then make an appointment to get a new will drawn up. It is an understandable that people put this off, due to the expense, but a will could be a really meaningful gift to your new partner that demonstrates your commitment to each other.